All in All, We're Just Another Kid in the Mall 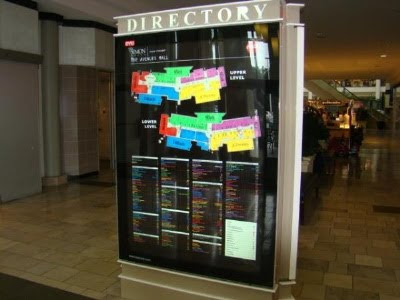 Today I willingly went to a place I normally avoid like the plague ~ the mall. When I was 13 or so and in California, I practically lived at the mall on weekends. Now I try to avoid even driving past it. It’s not really that bad of a place. I don’t know why it gives me hives. Maybe it's the traffic, the parking lot, the gaggles of giggling girls and "whatever" dudes everywhere you turn. The oddest thing is that I fondly remember being one of them. But the mall I lovingly remember had stores which no longer even exist. Such as:

Custom t-shirt shops. The stores where you’d pick your style of shirt, then the rubberized iron-on transfer of choice from a giant book. They’d fuse your Bay City Rollers or Star Wars transfer onto your shirt with those giant presses that are probably now used to make paninis somewhere. The shirt would smell of melted rubber for days. And if you were lucky it would last about four washes before it started peeling. Somewhere in this house is an old Shaun Cassidy jersey. Or what’s left of it.

Orange Julius. The grandpa of smoothie joints. Sure they’re still around in some places as part of the mall Dairy Queen, but you couldn’t swing a dead cat without hitting one back in the day. Some malls even had two. Such a simple menu, two Julius flavors. No wonder they’ve been trampled by the competitors. Orange and strawberry just can’t compare to Very Berry Blitz with Soy Protein and Wheat Grass. (Excuse me, I just threw up a little).

The video arcade. The arcade was the pickup joint for the too-young-to-drive set (if the guys could take their eyes and hands off the games long enough to notice you in your Calvins.) If a boy challenged you to a game of air hockey, you knew you were in. Until you wiped the floor with him, then you were out again. I miss Centipede and Pac Man ~~ I refused to be relegated to Ms. PacMan, that ghost gobbling whore in a bow.

The mall movie theater. None of our area malls have attached movie theaters, but they all seemed to back in the day. Which was perfect for us less than honest teens. “Dad could you drop us off at the mall? We want to see ‘The Black Hole’ for the third time.” Parents would be so grateful to get you out of the house for a few hours that they’d drop you off, watch you buy your PG tickets, walk past the minimum-wage ticket ripper then happily drive away. Then you’d leave your theater and walk over to see Animal House or later, Porky’s. Of course you would rely on the one friend in the group who had the PG film to give you a crash course on it in case your parents suddenly got a clue. Which they never did.

The record store. This is where the majority of my babysitting money was spent. Hours sorting through LPs (for the kids reading this: they were big black CDs with tiny holes in the middle) and cassette tapes (spooled brown ribbon in a plastic case) and 45s (medium black CDs with big holes in the middle). If your mall’s lucky enough to still have one, got there quick. It'll be gone next week.

Today’s mall adventure revealed that while a lot has changed since I was a mall rat, a lot has remained the same. Parents still dump off gangs of pre-drivers looking to pass the time and hook up with the opposite sex. Girls hang with the girls and boys with the boys, until they pair up at the food court over a slice from Sbarro. I may take my husband on a mall date sometime in the near future. We can hold hands and kiss while sharing a plain old Orange Julius. Nothing gives me more pleasure than making 13-year-olds squirm. Now if you’ll excuse me, I have to pick up my son from middle school. In my bathrobe.
Posted by Suzanne at 4:36 PM