So Many Titles I Could Write...Let's Just Call This One...OMFG

I get a lot of forwarded emails. I mean A LOT. Most of them are utter crap and I delete them without even opening. Some come from friends or family, so I'll read it thinking it's a pleasantry before realizing it's a forwarded fable attempting to sell me on their politician/religion/insurance....THEN I delete (if I've had my morning coffee) or send a "knock it the fuck off" reply (if I haven't). And many forwarded emails have me heading straight to Snopes.com so I can provide to the other 68 people who received the "personal" message that:
But once in a while I get a forward that I LOVE. More often than not it's from my friend Kathy, who shares my wicked sense of humor and left-leaning politics. But even Kathy once in a while sends me something that makes me question its validity. Tonight was one of those times. She sent me some old ads she had been sent. One of them made me search the web to see if it could possibly be fake. But nope, it was real. It's so...bizarre/obsolete/mysogynistic/offensive...It's an OMFG forward. And research proved it was just the tip of the iceberg.

So Ladies and Gentlemen, allow me to introduce you to some 1920s-1940s advertisements for Lysol. NOT for what it could do for your horrifically offensive garbage can or diaper pail. For your vagina. Yeah, you heard me. THAT's why husbands were acting like such an assholes from 1927-1948. Your nether-regions didn't have that same "AH! Now THAT's clean!" aroma that your disinfected trash bins did. Read 'em and weep/laugh, ladies. And smack yourselves upside the head in atonement for your grandfathers, men. I hate to paraphrase an old cigarette ad, but vagina's have come a long way baby. Now if you'll pardon me, I've got a bottle of Massengill's "Mango Mist" somewhere in the hall closet that's about to expire. Flowers and tropical fruit...now THAT's the way God intended it to smell down there. 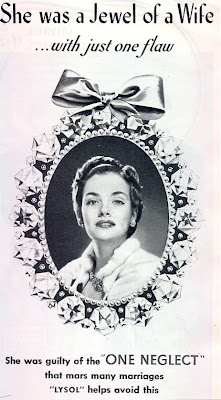 Note: If you got this blog entry sent to you automatically via email, just click on the link at the bottom of the email so you can see it real blog, with the pictures and the "appropriate" song choice. Oh...and everyone...feel free to forward this email. ;-)