My Karma Ran Over My Dogma 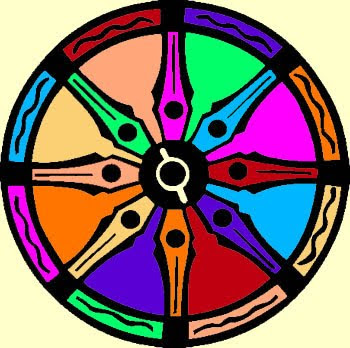 3:00 p.m., Saturday June 12:
Blogging quickly from the USAirways gate, about to board a flight to Los Angeles. I was originally slated to fly out at 2 p.m., stopping in Phoenix for an hour. They screwed up and made it impossible to catch my connection. But by some twist of fate, the airline paged me and offered to put me on a later, direct flight that would get me to LA at my original landing time. Awesome. Then I look at my new ticket and see it says, 1D "First Class." I look at the woman at the counter, and she simply whispers "You were a sweetheart, you never saw me, don't mention my name or I'll get in trouble." Awesome! "I was never here, I never met you, but I love you" I tell her. Feeling full of luck and with a bit of swagger, I ask at the information booth if USAir has a first class lounge. Yes, I'm a rube whose never flown first class, and I plan on milking this ticket for all the perks it's worth. I'm directed to take a secret elevator to the third floor. WHO KNEW the airport had a third floor! The doors open, and the elevator is immediately filled with the aroma of gardenias and orchids from the lounge's reception desk. "I don't know if I'm allowed to be here, but I thought I'd try," I say to the size 0 supermodel behind the desk. She looks at my ticket, asks if I arrived from Europe, and then denies me entry upon getting my answer. *Note to self: whenever a skinny broad asks if you've arrived from Europe, say "yes." I return to the aromatic lift (that's British for elevator, you peasants) with my head hung in shame, as Eurotrash in ripped jeans and sweat-pitted T's look on in disdain. "Bugger off" they seem to be saying in their minds (British for F.U., you peasant!). So now I sit at the gate, with my prized golden ticket, waiting to board and sink my suburban housewife ass into a plush, extra-wide window seat with extra leg room, built in TV screen, free dinner and wine served on real plates in real glasses...typing to the background noise of two SCREAMING and kicking toddler twins sitting behind me, kicking my chair. Their mother is oblivious, talking on her cell about Milan and D&G. Crap. No on in coach talks about Milan and D&G. Yep. First class. I see her ticket. First class, seat 2D. Right behind me, with her screaming tantrum twins. I'm thinking of spending $12 for a bottle of Benadryl at the airport shop, slipping it into her purse, and hoping she gets the hint. Karma's a bitch.
Posted by Suzanne at 2:58 PM