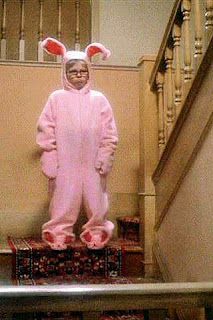 Merry Christmas!
Hopefully, you have all found your lost gift cards after digging through the gravy soaked garbage bags, have dug yourselves out of your driveways (east coasters), figured out what that wet stuff coming down from the sky is (west coasters) or managed to shoot/stuff/mount somethin' (the middle bits).

I myself am hiding up in my bedroom office playing on the computer because I can't take one more minute listening to the background music that comes with the Wii. I hope that "composer" made a fortune, because I'm pretty sure there's a bounty on his head by now.

Christmas used to be a lot easier when my kids (two boys, 8 and 14) were younger. It wasn't so much about the content of the boxes under the tree as it was about bulk. Giant box? Good! Didn't matter to them that it was filled with $10 fake Legos. As long as the box took up half the living room, they were happy. Then something clicked in their little consumer brains, and they figured out that the "good stuff" came in smaller packages. They figured out the difference between name-brand and knock-off. And yet, they still expected bulk under the tree. I've heard I'm not alone in this. And I expect that Wells Fargo, Bank of America and Wachovia are pretty much expecting everyone's January mortgage payments to include a late fee.

Despite the "gotta wait for the next paycheck" shopping on Dec. 24, and the "cross your fingers and hope it goes through" credit card transactions, most of our kids probably had an awesome Christmas morning and are already plotting their wish lists for next year. The thought of that got me thinking about some of the best Christmas presents I've given, and gotten. (It's a real conjugation...I looked it up!)

My parents were divorced for several years, then remarried each other and soon after moved my younger brother and I clear across the country from Pennsylvania to Nevada. Sparks, Nevada to be exact. Never heard of Sparks, Nevada? Yeah, well, why the hell should you have? It's in the middle of nowhere and it was butt ugly (at least in the mid-to-late 70s). Tumbleweed was their local flora. Their local fauna were truckers, commuting hookers and religious fanatics...at least in our neighborhood.

I was 11. I knew no one. I missed everyone back east. And I'd been told, against my will the year before, that Santa was "a lie, and did not exist." Needless to say, I wasn't expecting much that dusty Christmas. A cyanide pill would have been a welcomed stocking stuffer. But I got this little box under the tree that 6th Grade Christmas. In it was 20 business cards. No, I hadn't been franchised. They were all cards for a nearby ranch that sold horses and offered trail rides with Arabians. Each card was signed on the back by the ranch owner and was good for a one-hour trail ride.

To an average girl, a box of business cards instead of makeup or Donny Osmond posters would have seemed like crap. But these cards became, to this day, one of my most memorable gifts. These twenty hours on horseback were twenty hours I wasn't at home living with strangers. They were twenty hours spent on "Blackjack." Blackjack was my horse of choice. Not too tall, not too short, not too fast, not too slow, Blackjack knew the trail like he'd blazed it himself and was my Saturday companion for the rest of 6th grade. I dreamed of buying him for my own one day. When I got to know the ranch owner, she let me use my hour-long cards for two half-hour sessions instead, which enabled me to invite neighborhood girls to join me. Yeah, it was an 11-year-old transcontinental transplant's attempt at bribing kids into liking her. I knew it, and they knew it. I don't remember any of their names anymore, but for at last 30 minutes on each Saturday, I had a friend on my new coast. And I had Blackjack.

My last six hours or so, I didn't want to share with pseudo-friends. I just wanted Blackjack and the trail to myself. I knew I'd never own him, but I just wanted to savor the bladder-bursting gallops with him by myself. Blackjack's long since dead, but I'll always remember that winter/spring riding the barren trails of Sparks, Nevada with him as one of my favorite childhood Christmas gifts.

Given: Hands down easy answer.

"Me" at Christmas is hooked on "A Christmas Story." The movie completely resonates with me, having grown up in my grandparents same-era house in West Mount Airy, Philadelphia. I've replicated some of the sets in our own house. The push-bottom radio with the chrome bowling ball liquor dispenser on top? Got that. Bing playing on Christmas morning as the kids descend the stairs? Done that. Pink, footed bunny jammies with hoodie and ears?....Well, I'm not psychotic, I've never done that to my kids. BUT the movie is ingrained into my brain, and into my son Evan's.

When Evan was 9 he still firmly (as far as we could tell) believed in Santa. Without consulting my other/better/wiser half, during a shopping trip in the Amish country I purchased at a dry goods store a "Red Ryder Official BB Gun." It didn't have "a compass in the stock and this thing that tells time," but it was as close to the real deal as they made. I wrapped it in plain paper. And Christmas Eve, after the kids had finally fallen asleep and when my husband wasn't looking, I hid it in the living room. Behind the desk.

Once all the presents were opened, somehow Evan was subtly (OK, maybe not so subtly) directed to look toward the desk. When he opened it, he was stunned. Something that he didn't even know he wanted and had never even asked Santa for instantly became his most treasured gift that year. He shot cans from our recycling bin, still dressed in his jammies. He schlepped his oiled steel beauty to New Jersey that afternoon and turned my in-laws backyard into a rifle range, much to the chagrin of their Home Owners Association I'm sure.

You don't get to many chances to blow a kids Christmas mind (in the good way) as a parent. I don't think my parents knew they were blowing mine when they stopped by that ranch and asked its owner to sign a bunch of 2x3" cards. But they accidentally did. And I don't know if that unexpected pediatric weaponry blew my son's mind, but that memorable look of amazement and surprise makes me hope it did.

I don't really relish growing older, but I do look forward to one day blowing my grandkids' minds, and maybe ruffling my daughter-in-laws' feathers, with one or two memorable Christmas gifts somewhere in the far future. To me, nothing would be cooler to Grandma Suze than knowing my sons' kids were drifting off to sleep, pringing ducks on the wing and getting off spectacular hip shots.