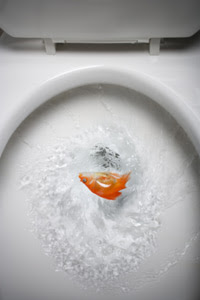 Yesterday while I was grocery shopping, my sons successfully managed to talk their father into letting them combine their $50 in Christmas gift cards and purchase a Chinese dwarf hamster. They met me in the frozen foods aisle with huge smiles on their faces, a bag full of rodent paraphernalia, a small box with airholes punched into the side, and $5 in change. There was no need for a cage, since they knew we already had one in the attic. WHY did we have a hamster cage in the attic? Well, that leads to the point of this entry.

"Nugget" is now residing in the former home of "Hammie." Hammie was a Black Bear hamster Evan got for his birthday about four years ago. Very sweet, and a bit of an escape artist. One day about six months after we got him, I came down stairs in the morning and started yelling at the kids for leaving a wet sock on the living room floor. Only, it wasn't a wet sock. It was Hammie. He'd pulled a noctural Houdini act, only to be found and "played with" by Daisy the Dalmatian.

Hammie rests in peace ( and just one piece, fortunately) in "Poopy Park," a small dog-walking park around the corner from our house. But Hammie is not the only occupant of the "Stanley Family Plot" at Poopy Park, for Hammie was preceded in death by Sponge Bob and Patrick. Sponge Bob and Patric were parakeets who met their doom one afternoon when someone accidentally bumped a knob on the stove and heated a Teflon frying pan on low for an hour. (Apparently, Teflon fumes are lethal to parakeets.) Sponge Bob, Patrick and Hammie were later joined by Bubbles the goldfish.

Yes, we buried a goldfish. Bubbles was no ordinary fish. We won him at the local church carnival, and he proceeded to grow as big as a tennis ball. This was the kind of fish who would swim to the edge of the tank to greet you in the morning and who, when he knew you were about to clean his tank, would swim INTO your hand as if to make your job easier and say "Thanks!" Bubbles lived a long life, and when he finally floated to the top, he was just too noble of a creature to get the customary "burial at sea." So Bubbles rests his fins alongside his furry and feathered counterparts in Poopy Park.

Daisy the Dalmatian and Pudding the cat have also passed on since we moved into the house of pet death, although they both lived long and happy lives (Daisy, 11; Pudding, 18) and neither was flushed or buried in the park. All we have now are two freakishly large goldfish (we apparently rock at raising fish); "Hopscotch," a dwarf rabbit who thinks he's a dog (we had two, but one was a psychotic, biting rapist and had to go); and now "Nugget."

Goldfish have been known to live up to 20 years. This is not acceptable. I do not want to be scraping algae off the sides of a tank well into my 60s. I'm giving "Oprah" and "Dr. Phil" until Ben hits high school, and then they're going into our friend's koi pond where they can grow to the size of shoe boxes and eat their weight in flakes. I'm not necessarily telling my friend they've gone in either. Let them think it's spontaneous generation.

The lifespan of an indoor rabbit could be 10-12 years, which means I'll be finding rabbit droppings on the sofa until Ben is a freshman in college, or Evan marries a woman who likes rabbits (unless he's living in his "basement apartment" when he's 24...which he won't be...)

Nugget isn't going to be a problem. Hamsters live 2-3 years. The Guinness Book of World Records says the world's oldest hamster made it to 7. Either way, Nugget will live a happy life running his wheel at 3 a.m. until his time comes, and then there's plenty of space at the family plot down the road. And the cage'll go back into the attic when it's vacated, just as before. Until it's time to give the unborn grandkids a hamster.

*Ben by Michael Jackson.
About a kid and his pet rat named Ben.
I have a kid named Ben.
He has a pet hamster.
Close as I could get.