Bring It On! ... with a few exceptions 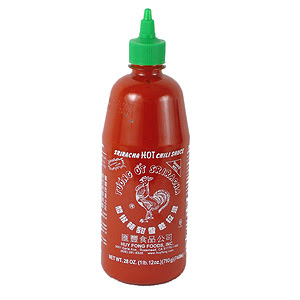 As I've frequently shared, I grew up living with my grandmother, my English/Welsh grandmother. The English/Welsh are known for many wonderful things, but culinary experimentation was not one of them in the 1970s. My grandmother, and her mother and mother's mother before her, believed in cooking things until they were D.O.N.E. done. Meat was cooked until it was brown, through-and-through. Vegetables were cooked until they were barely able to still be considered a "solid." At 433 West Upsal Street, things like wontons, sloppy joes or spaghetti were simply unheard of.

After we left Grandma's house, things got a little more interesting in the food department. Out went grandma's pressure cooker and in came the savior of 1970s working mothers' kitchens: the crockpot. I remember awesome all-day crockpotted (it's a word if I say it's a word) sloppy joes. And "barbecuing" became part of our vernacular. My father once even brought home and cooked blowfish. We survived.

When we moved west, we had our very first Mexican food when a Mexican family we befriended came to our house and prepared a feast. I remember thinking that guacamole looked revolting. But I was either willing or forced to try and was instantly addicted. Tamales hand-wrapped in husks, black beans, mole sauce...it was like a suburban white kid's version of a Mexican Babette's Feast. And it was the birth of my adventurous spirit when it comes food.

Today, I love "exotic" food, foreign food. Indian, Thai, Vietnamese...heaven. Spicy food? If it makes your nose run and your eyes water, bring it on. I pride myself on my willingness to try just about anything once, an attitude I've passed on to my boys. Over the course of my two-score-and-a-few years, I have eaten some very unusual foods. Sometimes I just wanted to try what the locals were eating (a giant haggis in Scotland). Sometimes I was trying to be polite (spicy raw crab in Los Angeles). I may not always enjoy what I'm offered, but I'm willing to try it. Scrapple, monk fish liver, beef tongue...sure, why the hell not. But despite my love of the exotic and my adventurous spirit, there are certain things that I simply cannot bring myself to even try. Some are foods that others I know adore. Others? Well, you decide....

Raw oysters. I cannot bring myself to slurp one of these down. To me, it feels and looks like I'd be swallowing whole a giant gob of salty phlegm topped with Tabasco and lemon. I'll take the Tabasco and lemon, but in a Bloody Mary. You can keep the snot-on-the-half-shell, thank you.

Brains. Nope, not gonna. I lived on a religious commune where one hippie mother fed her infant son calves brains. Blenderized brains to boot. We had tubs of them in our freezer. I'll never forget the look, smell and sound of her preparing them. I don't care if you cover them in Godiva chocolate or batter-fry them...I firmly believe that if it was encased in a skull it was not meant to be eaten. Which leads me to...

Head Cheese and/or Souse. This is a double whammy of things I don't "dig." Face meat and aspic. I can understand and appreciate its origins. It makes complete sense to use every available part of an animal if you can, including their cheeks, jowls, ears...Hell, I willingly eat scrapple and it has pig bits I don't even want to know about! But the inventors of scrapple knew what they were doing by grinding the bejeebers out of things then mixing them with cornmeal. It looks disgusting, but at least it's uniformly disgusting. (And delicious, BTW). The guy who invented head cheese, however, took the exact opposite approach. "Let's make every chunk visible and identifiable, then let's pack 'em in jelly! Make them jiggle a bit! I know, let's get Mikey to try it!" Pass.

Balut. This boiled egg is a treat in the Philippines that you can occasionally find in larger U.S. cities. It's no ordinary boiled egg. A balut is a duck (or chicken) egg with a nearly developed embryo inside that is boiled and eaten right from the shell. Yeah, you read that right. Look... I love eggs. I love chicken. I love duck. I don't love the idea of boiling and eating an unborn baby duck. I guess that makes me a poultry pro-lifer. I say let 'em hatch, grow up for a few months, then eat 'em!

If you're an oyster, brain, souse or balut fan...well, the more power to ya. I'd actually love you to leave me a comment below. Do your best to persuade me to reconsider my disdain for any of the above. I may be able to be swayed to try two of the four. I'm pretty sure you can guess which two.

"Chili Sauce" by Louis Prima
Posted by Suzanne at 8:09 PM

+1 on oysters. Not that good. But just being able to say you can do it.

+1 on brains. Not that bad. Fried, scrambled calf brains at my grandparents house Okay, maybe it's a sentimental rememberance. It's been 40 years.

Time to get your Lecter on.

With a few beers in me, and while holding my nose, I could possibly down an oyster. I would eat "rocky mountain oysters" before I'd eat brains.