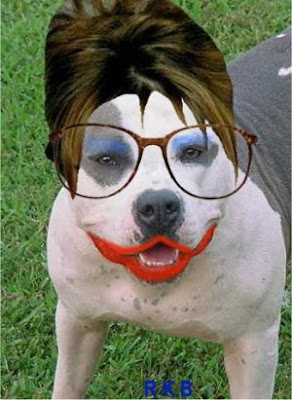 Well it was a wonderful, lazy 4th of July break...with an overabundance of pyrotechnics, pilsner and pie. At one point someone jumped into a pool fully clothed. I plead the 5th. In the news: Michael Jackson is still dead. Hasn't been spotted at a Wal-Mart yet. And while folks were still yammering on about him as they crammed down dogs and burgers, a sneaky little gal up in the last frontier thought she could take advantage of the distractions and make a little announcement.

Being the nostalgic soul I tend to be, I started reminiscing about the good times we've had together. About the debt we all owe her...for the laughs...for an improved SNL...for helping Obama win! I thought back to the first time we all saw her, up there at the podium at the Republican National Convention. How she "won" the crowd with her poise and humor. How she joked about the only difference between a Hockey Mom and a pitbull was lipstick. That got me wondering about what other differences and similarities there might be between said mom and pooch. So I looked up some of the traits on pitbulls...and away we go:

"A pitbull is a dog that tends to love people, all people..."
As long as they're pro-life, non-immigrant, and Republican.

"Pits are notorious clowns and will always make you laugh."
Well, yeah! Maybe not intentionally, but hell yeah!

"They seem to subsist on love and attention."
From plumbers, radio show hosts and the RNC.

"Pitbulls are extremely intelligent."
Some even know the names of magazines, websites and news journals they read.

"Pitbulls are very adaptable."
They'll do well now matter how many times they switch colleges or careers.

"Pitbulls that may have once been calm, when they become 'middle aged' may start to become agressive and to lose their eyesight."
They can no longer see Russia from their front porch.

"They are very resourceful and driven."
Double check.

"'Determination' is one of their most notable traits. They just don't give up easily...once they sink their teeth into something they will never let go."
Except when they've only one year left on their term as governor. Then..."feh."