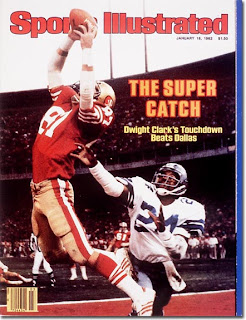 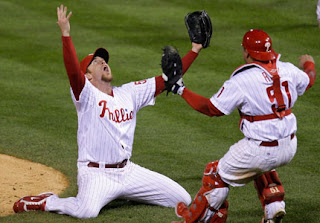 Short and Sweet: I think I may be an 18-34 year old man trapped in a 40ish woman's body. I love Judd Apatow movies; I often quote Fuzzy Door TV shows verbatim;I can swear up a blue streak when needed, and drink like a sailor at times; I pee standing up; and I am nuts for the Phillies. Alright...one of those isn't true. (I don't swear that much). But I have a rabid devotion to the Phillies that is a little freaky in a woman. I'm not the only woman I know with this affliction, but it's freaky just the same.

I've gone through periods of Phillies remission. In fact, I actually thought I was doing rather well since 1994. Back in 1993, when I had a "Press" discount card and could get into games for a mere $3, I was going to Phillies games several times a week, dragging along anyone who'd come with me. I didn't care if my nose might bleed up there in the cheap seats! Ricky, Micky, Dicky, Lennie and Kruk needed me there! Schilling didn't need anybody, he was that good. But I was there for him anyway. I was even there for the "Wild Thing." I remember feeling bad for Mitch Williams when Schilling covered his head with a towel as Mitch took the mound late in Game 6 of the World Series. Now, I wish Schilling had strangled the future salsa-making SOB with that towel. But I digress...

Who can we blame for the origins of my occasional gender confusion? Well there are myriad sources, but I rest blame squarely on the beautifully sculpted shoulders of Dwight Clark and Joe Montana. Going to high school in the heart of San Francisco, Montana had just come to town and was a sight to behold. Great player, cute as a button, and media savvy. I was in love. Pair him up with Miss Universe-dating wide receiver and equally handsome Dwight Clark, and girls my age were hooked not only on Clark and Montana, but on football and the 49ers that season. I watched every game; went to three. I went on walkathons to meet them. I volunteered at the Y when I knew some would be there to help out. I was pathetic. Then came Super Bowl XVI and "The Catch." If you don't know what I'm talking about, Google it. If you do, then you'll understand. It was a thing of beauty. They let us out of school early so we could run down California Street to catch the victory parade. I was right at the cable car turnaround at the Embarcadaro, watching Clark and Montana (in fur coats!) board their cars. My family moved back east the next year, but I stayed loyal to my Niners as they went to the Super Bowl over and over again.

Other interests eventually took over for my love of sports (or players?) as I got older. College, music, travel, etc. But the fever seems to be creeping back in. I was embarrassed to admit it for a while. But as I meet more and more women who are suffering from these same hot Phillies flashes, I'm starting to come out of the closet. Make that "come out of the locker." There are more of us dames out there than you guys realize. And some of us know what the hell we're talking about. So the next time you're sitting next to a woman at a sports bar and think she's only there for the cheap drinks on Ladies Night, think again. Buy her the drink, but think again! She may know more about the game than you. Hell, she probably knows more about most things than you!
Posted by Suzanne at 10:21 PM