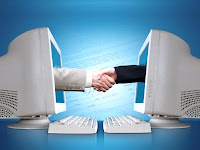 Pen Pals. Anyone else have one way back in school? I had a few in my time. A couple were assigned as class projects and quickly fell by the wayside. Others I found through answering common interests ads in old teenybopper magazines.
Wanted: Pen Pal to share stories, pictures, dreams & thoughts on Barry Manilow...
Those were the ones that stayed around for a while. When you find someone you "click" with, you enjoy communicating with them --even if it's only monthly and by air mail. As an adult, you may think that most of us don't do such silly things as writing back and forth to perfect strangers! Well, the hell we don't! Twitter is the modern-day, rapid fire version of pen pals. Absolute strangers "tweeting" each other about common interests, 140 characters at a time. Sometimes it's done with absolute anonymity. No photo or real name used. But other times actual friendships start to develop online, which leads one to ask:

If you want the definitive answer to that question, just ask Kelly Hildebrandt. Or, you could ask Kelly Hildebrandt. Wha? Well, the two Kelly Hildebrandts met each other thanks to female Kelly's sending male Kelly a Facebook message about their common name. One thing lead to another...and wedding invitations should be going out soon for their October nuptuals! Not all internet friendships go that far, but some can evolve into something bordering on "real." Facebook is mostly for friends and friends-of-friends to keep in touch and share photos. Twitter is more anonymous, at first. On Twitter, you can end up with sometimes hundreds of "followers." It seems like an ego boost, until you realize that most are following you because they hope to sell you hemorrhoidal ointment or credit repair kits. But once in a while, you and some "followers" hit it off. Take Kathy and Amber, fellow mommy bloggers from Alaska and Indiana. And my insomnia buddies: FC, CW and KV.

I can fall asleep at a semi-regular hour, but without exception I shoot up in bed a couple of hours later wide awake, mind racing. Until recently I would have just laid there, fretting over whatever it was that rattled my subconscious. Now, I just reach over for my little, brightly-glowing iThing and log on to tweet for a bit with one of the nighttime crew. Two live in LA and one is a 3rd shift worker in Ohio. So when I'm up at 2 a.m. tossing and turning, someone's either on a work break, sitting down for one last email check before bed, or in some cases getting ready for a party (this is LA). We talk about jobs, ambitions, baseball, comedy...you name it. Then we part ways. Sure, we're not at the "I'd give you a kidney" point, by any means but we are swapping email addresses, trying to expand each other's horizons, and keeping each other entertained, even in the daytime hours. So even though I haven't a clue what some of them look like (CW, we all know what you look like!) I do think of them as friends-in-the-making. Well I have to go now and get ready for bed soon. In a couple of hours, I'll wake up and hear how FC made out on her first day of vacation; what book CW has picked out for me; and how KV's flight was once she lands. All in 140 characters or less.
Posted by Suzanne at 5:26 PM

I'm loving the friendships I'm making on the interwebz. Smart women who make me laugh, get my probs, etc... and can't critique my lack of makeup and spit-up ridden clothes 'cause they can't see me!

Thanks for being one of them!

Hey, we can't see the "urrp" but we know it's there and love ya anyway! You haven't been truly loved until you've been "urpped" upon.