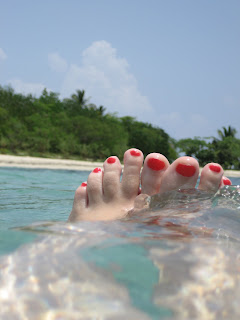 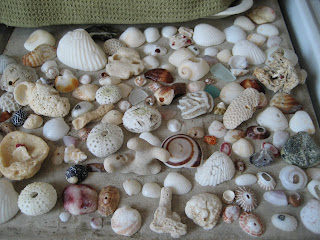 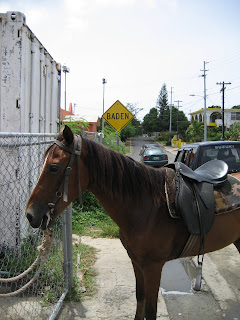 Vieques Vacation Toes~~~~~~Treasures from the Beach~~~~~~Colmado Parking Lot
Vieques is an island of only 9,000 permanent residents; and a hell of a lot of visitors during the “Turkey Day to Tax Day” tourist season. We were visiting as far off-season as you could get. Now, going off-season has its drawbacks. Half the restaurants are closed, and the ones that are open have extremely limited menus. After all, this is a place where EVERYTHING needs to come by ferry from mainland Puerto Rico. Why bother stocking your restaurant pantry completely when you’re not sure if you’ll have any customers that week? But if you’re of the ilk that doesn’t mind playing it by ear or living off the cuff, the kind of traveler that loves dining at roadside Pastillos stands in front of brightly-painted houses and getting supplies at the local colmado (corner store) then I think off-season is the way to go. Sure, your hair will never dry and you’ll sweat bullets in the August heat. But what’s a little (OK, a lot) of sweat and a limited menu when off-season also means completely private beaches?

When I say completely private, I mean completely private. Vieques beaches vary from nearly-still turquoise waters to rough surfs. But in late August, no matter which beach you choose, you’re alone. Fine, fine…we weren’t utterly alone. On one beach, we had a horse wander from the bushes, walk along the water’s edge and then check out our beach chairs. And on another we had a jeep pull up, notice our jeep, and turn around. But other than that, beautiful solitude. Breasts came out of suits. Mine stayed in their Lands End underwired wonder, but someone else quickly dropped her top. (Hey! How are you? Do you read this blog? No? Good! Yes? Nice tatas! Boob burn peeling yet? How did you explain that tan?) Fortunately, our mother kept them under wraps as well. There’s not enough rum in Puerto Rico…

In Vieques, in late August, the haze is a deceptive fiend. You can be swimming out in the azure ocean for two solid hours, lamenting that the sun is hidden and you’re missing the opportunity for real tanning. Then you drive home up the horrifying hill, strip down in the bathroom, look at yourself in the mirror, and scream out “Holy Crap!” as you notice for the first time that you’re a lobster with strap marks. Just as there isn’t enough rum in Puerto Rico, there isn’t enough Jergens to soothe the pain of the first burn. It doesn’t mean you won’t willingly go out and do it again tomorrow though. I mean, after all, this is Vieques! A good hour in the hammock listening to a friend’s tunes (you’re listening to some of his canciones de la guitarra right now) and it was soon the “Golden Hour” in Vieques.

As the wife of a photographer, I know all about the camera’s golden hours: the first or last hour of sunlight when the lighting is diffuse and warm and shadows long. What I dubbed the “Golden Hour of Vieques” is the time when the myriad chickens and roosters settle down for the evening and the coquis come alive. When the crowing subsides and the “coqui-coqui” chorus begins. When the Golden Hour passes, that means it’s time to head into Esperanza for some local fare, a stroll, and a bottle of rum from the “green store” to bring home. Day 2 done. We’re officially chilled and starting to lament that there are only 4 days left until back to the “Real World.”
Tomorrow: Oh, who the hell knows! I'll think of it tomorrow!
Posted by Suzanne at 6:14 PM