Vieques basically has two towns, Isabel II and Esperanza. The ferry lands in Isabel. The “place to be” is Esperanza. Our hideaway for the week, “Hacienda Herman” as we affectionately dubbed it, was a hilltop home in the Bario Florida neighborhood between the two towns. But this was no ordinary hilltop. Close your eyes and picture this…no wait, don’t close your eyes or you won’t be able to read. Keep ‘em open and imagine…dodging wild horses and loose dogs on the “main road.” Making a hairpin turn into what appears to be a tree. Ascending what at-first looks like a paved road nestled amidst vines and overgrown greenery. The “paving” was probably last touched in the late 1970s. The five homeowners on the hill have a made a conscious decision to leave the road in as poor, yet drivable, condition as possible to discourage curious locals and tourists from trekking up the hill. A trek only a 4-wheel-drive could handle.
When I first started up the hill (I was the driver for the week), I thought to myself “If the road is this crappy, the houses must be awful!” Then, just about when you think the jeep engine will blow, you see the first “house.” A four-tiered, gated manse complete with rooftop pool and sauna. Preconceptions shot to hell. A hundred feet higher, a smaller yet equally lush and brightly painted massive home still under renovation and nestled into the hillside. Climbing higher. “Keep your arms in ladies,” as vines whack against the car on all sides. Sharp turn. And there’s Hacienda Herman. A bright pink two-bedroom tiled getaway with an unbelievable view from three sides. Perched nearly at the top of this “hill,” you could see for miles. You could watch the clouds roll in and the ferries pull out. Rooms were picked, bags unpacked, shoes removed and we all plunked down to catch our breath after the world’s longest travel day. Then the sound hit. Chickens. They were the daytime soundtrack of Hacienda Herman. You thought they’d drive you nuts. But somehow the constant crowing and clucking just became part of the scenery.

We briefly considered suiting up, heading back down the hill and diving right into the Caribbean, but we were all so exhausted (someone had the genius idea of going to an 11 p.m. comedy show the night before our 7 a.m. flight...actually, it was terribly fun!) that a quick dinner in Esperanza was all we could muster before we all needed to come “home” and pass out. The sun had set, the chickens had retired and the clucking was replaced by the chirping of thousands of elusive yet vocal Coqui frogs. I don’t know if it was the sleep deprivation, the heat, the journey, the two pina coladas at Bananas or the lull of the coqui, but I slept 6 hours without turning. May not sound like much to you, but for a chronic insomniac, it was a miracle. 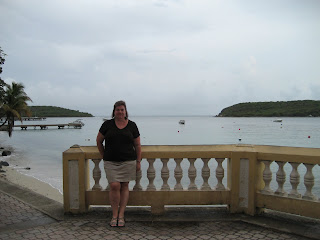 Suze on Walkway in Esperanza 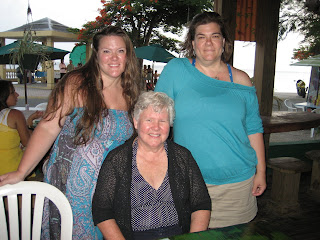 Bananas...the eatery, not a diagnosis
Posted by Suzanne at 10:18 AM