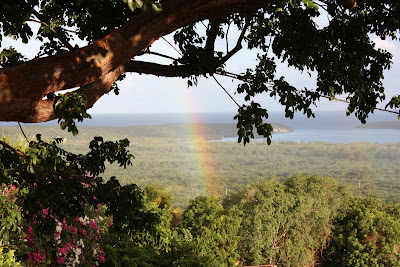 Bioluminescence, coqui, privacy, free-flowing rum, wild horses, geckos…some of the things I’ll remember fondly about Vieques. But what I’ll remember most is Milagro.

On the ride back to our hacienda after swimming in Bio Bay, our jeep blew a tire. I mean we blew this tire out! Ordinarily I could have changed a tire myself. I’m just that kind of broad. Problem #1: We were on a very dark and isolated road. Problem #2: We had no jack. Problem #3: Our spare tire had been stolen.

My sister’s mother-in-law who knows the island well, took off down the dark road looking for an illuminated door to knock on. My sister went with her for safety. My mother and I stayed behind. “Whoever gets help first, call Mike to come fix the tire,” was the deal. Ordinarily, this wouldn’t have been a problem. Problem #1: I don’t speak Spanish, I speak French. Problem #2: Mom doesn’t speak Spanish, she speaks French. What happens next proves what a small island Vieques is and how great its people are.

Five minutes after the blowout, I saw the first set of car lights coming our way and we flagged down the driver. I managed to remember one of my few memorized sentences in Spanish. “Hable Inglés?” (My other Spanish sentence you ask? “Donde esta la playa nudista?” Don’t ask why I know that.) Well fortunately the couple who stopped indeed hable’d. We explained our situation and said we needed to call Mike and named the hotel he owned. They not only hable’d Ingles, but they had Mike’s cell phone number on speed dial! They called, we thanked, they left and we waited for the other half of the cell-less travelers.

Ten minutes later they emerged from the dark, bringing back a Milagro. Milagro is Spanish for “Miracle.” It’s also Viequesense for “woman who lives down the road and brings her entire family to help strangers.” Milagro, her husband and their two young boys only spoke Spanish. And only my sister’s M-i-L spoke Spanish beyond being able to order tequila shots or find nude beaches and libraries (hey, you need a good book on the beach!) While Milagro’s husband tried unsuccessfully to repair the blowout with a can of Fix-a-Flat (which is almost a form of currency on Vieques), Milagro started talking rapidly to the four of us using a lot of hand gestures. Now, I admit I didn’t get 90% of what she was saying. But even with limited Spanish, I could get the gist: “What the hell are four women doing driving on a dark road late at night with no cell phones? No cell phones? Silly white women from the mainland with your sunburns! SPF 60! Where’s your spare tire? Why are you wet at 10 p.m.? You all smell like plankton.”

When Mike arrived, he had a spare. He had no jack. He also had no patience or sense of humor. He did have yet another can of “Fix-a-Flat.” I don’t know why men think that a can of pressurized goo will fill a gaping hole in a tire, but they all do. Second can wasted. Fortunately, Mike’s companion arrived moments later with not only a replacement jeep, but a jack. As they stood there arguing with each other on the stupidity of traveling without jacks or cell phones, Milagro’s husband changed the tire. Milagro’s husband, who had absolutely nothing to do with this mess, changed our tire. Did I mention it was Milagro’s husband who changed the tire?

As the four silly wet white women got into their jeep, Milagro came over to say goodbye. Again, I don’t speak Spanish, but I got the gist. “My name is Milagro. If you ever need any help while you are here on the island, you know where I live. Knock on my door. This is my phone number. Go with God." There has never been a more aptly named woman. Vaya con Dios, Milagro.

I love that island! I hope it doesn't get "over discovered" in coming years.