Since I'm aspiring to be a television writer, it seems appropriate that I get around to having my own re-run. It's not a case of narcissism. At least I hope not. A friend's grandmother died today. She lived a long life and died peacefully in her sleep. But that's not really much consolation when you really love someone. His hurt was obvious, and reminded me of when Gwennie died at almost 101. It was pre-Twitter, pre-Facebook, pre-blog. I never wrote about what it was like being there with her at 2 in the morning, watching, and holding her hand as my mother and I waited for what we knew would be coming within hours. And I'm not going to do it now. But I did write about Grandma Shirley's passing this summer. And I thought I'd run that again today, just in case my friend happens to read. Once you stop hurting, remember the good stuff. Remember the fun. I'm sure that's what she'd want. What any grandmother would. I can't hug you E. but I'm thinking of you. Best wishes. Suze
Grandma Shirley 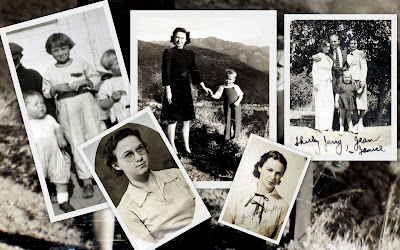 We just found out tonight that my paternal grandmother died yesterday down in Florida. Grandma Merino, or Shirley, was in her day what would be called a spitfire. Her personality was the polar opposite of my maternal grandmother, Gwen who died almost three years to the day before Shirley. Gwen would never wear slacks, drink liquor or swear (unless losing badly at cards...man did she let one fly once!). Shirley however was a California country gal who could ride with cattle, toss back a few and let the expletives fly when called for (and sometimes when not).

Maybe because of geography, but more likely because of divorce, I was never close with Shirley when I was growing up. It wasn't until I hit college that we started to bond. When I was 17 I cut classes for a few days and took a bus and two trains to go from Kutztown to her home in Long Island for a visit. She took me drinking. Yeah, I got hammered with Grandma. She made me try her favorites, all of which I hated. Grasshoppers, Melonballs...basically anything green and disgustingly sweet. Having just read Catcher in the Rye, I was inspired to switch to Holden Caufield's favorite, Scotch. Grandma switched right along with me. We spent the next day nursing hangovers and hanging out at the pool. Not your average "baking cooking with grandma" memory, but one I'll never forget and remember fondly.

Soon after that bender, Shirley moved to Florida and never looked back. She wasn't the type who looked back much. Maybe that's another reason we weren't terribly close. It dwindled down to a bi-annual letter or phone call as time went by. But when she did come north to visit, she was always the same as I remembered...a free-spirit with a great sense of adventure and no filtering of thoughts. (She could tell you she loved you, and that you looked bloated in the same breath, LOL). My kids thought she was a riot. Which, if you overlooked the "bloated" remarks, she was.

In the end, Shirley couldn't remember much. But I'll always remember her. And I may just have to have a Grasshopper this weekend in her memory. Raise some hell up there Shirley! Love, Suzanne
Posted by Suzanne at 7:42 PM