Baby You Can Drive My Car...if you can get it started 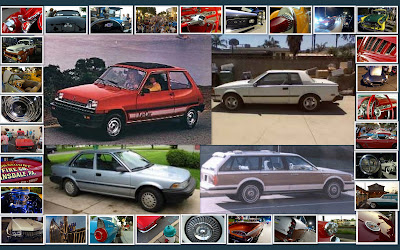 Chris and the boys went to Lansdale's "Under the Lights" car show this past Saturday, and the three shutterbugs went nuts. Even Ben was snapping away with an old digital. Looking over all the great shots that the three of them took made me think about les pieces de merde that I've owned over the years, some of which you will NEVER see on the road again.

My first car was a used Reneault Le Car, complete with crankable vinyl "moon roof." If you did over 60 (which was hard to do), not only did the car shake, but the vinyl flap rattled like it was going to fly right off and hit the car behind you. And that's when it was closed! When it was opened, you felt like the entire car could become airborne. It was officially declared a lemon, having the transission replaced twice in the three months I owned it. I got most of my money back and then had a hard choice to make...a used Pontiac LeMans station wagon or, for the same price, a brand new fully loaded Yugo. I wanted the Yugo, but wiser minds talked me out of it and I loved the wagon when I got it. Everyone assumed it was a hand-me-down, since no 22 year old in her right mind would buy a station wagon for herself. But I've never been accused of being in my "right mind."

I've also owned or inherited a used Toyota Celica and a Mazda Protege. But the most memorable mechanical member of the family is of course "Betsy," our famous (infamous?) 1989 Olds Cutlas wagon. Betsy was a recently put out to pasture when we inherited a much-used but slightly younger Toyota Corolla. Betsy sits in the driveway, lovingly collecting rust spots and a funky smell, awaiting our decision as to her fate. Much as I imagine I will be doing one day while Ben and Evan and their wives fight over who gets stuck with me living in their basement.
Posted by Suzanne at 4:06 PM