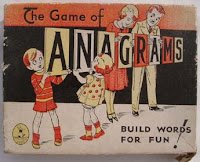 A rose by any other name...is a sore
Back when I was den mother to 12 flatulent prepubescent boys (half of whom had ADHD), I thought it would be fun one week to make anagrams of all their names and have them figure out just who was who. Teensy Naval for example was what I had for Evan Stanley. I nixed the idea however when the worst scout’s name came out as The Chosen. I won't name the boy, but it's easy to solve. I knew both he and his parents thought that that was actually the case--that he was The Chosen one---and I certainly didn’t want to provide anagrammatic proof! Of course I knew it meant he was Satan’s chosen one, LOL.
I revisited the online generator today on a whim, and I wanted to see if there might be other prophetic anagrams out there. I may have actually stumbled onto something. George W. Bush is Where Bugs Go and Dick Cheney is a Needy Chick. Sarah Palin however has several options worth mentioning. For our Spanish speaking friends, she is La Piranhas. Small but vicious. She is also an Anal Parish. Don’t know what that means exactly, but it’s to funny not to mention. I saved the best for last, as Mrs. Palin is also A Rash In Lap. That could SO explain her quick temper and irritability. Nothing a little Monistat couldn’t fix!

It also works for non politicos, so I tried it on myself before exiting the site. Suzanne Stanley? How about Lazy Unseen Ants. They're the ones off watching Springer while the other ones tunnel. I saved the worst for last of course. I'm apparently also Neat Sleazy Nuns who have Ten Zen Anus Lays. I guess you really would have to be Zen to do 10! But that's a whole other blog entry for another time.

Check out wordsmith.org/anagram if you're bored. I highly recommend it to my friends Urgent Rascal...Casual Nurses...Thy Rehab Trek ...Keg Me Nicely and of course Beneath Ken. (Ken, get the hell off my sister!)
Posted by Suzanne at 4:28 PM