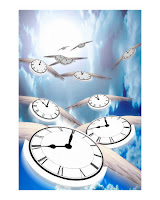 I haven't done anything with this blog since November? Where the hell did the last seven months go? In fact, where have the last 43 years gone? Yeah, I'll admit it. I'm 43. This is officially the last time I'm going to acknowledge that fact though. From now on I'm shaving off a year every time the subject comes up. I'll see how far down I can go before someone has the nerve to say "Really?"
I've never felt older than I have this year. It's because of Ben starting kindergarten. When Evan started school he was our firstborn and I, like most of the other moms in his class, had a baby at home. Now that Ben's the one in K, most of the other kids in his class are firstborns and most of the moms have little ones at home. I'm the slightly-graying mare in a sea of early-to-mid-30-somethings. Granted they're a great group of women and Ben and I have made some really good friends this year. But once in a while when I hear one of them mention their graduation year, or hear one say "Oh man, I can't believe I'm almost 35!" I get a pain in my chest. Of course that could just be my blood pressure acting up...at my age who knows! To make matters worse, my 30-year-old sister aimed a hearty laugh my way at lunch today when she saw that I had to hold the menu halfway across the table to read it! My only solace is that it's genetic baby! These eyes will be your eyes in a decade Sister! Of course, I'll be blind by then.

So after realizing that I'm older than most of my friends (note to self: find some over-50s to hang around so I look/feel younger), I decided I needed to shake things up a bit. I've dropped 40+ pounds since January, which sadly is but a drop in the bucket but is at least a running start. I "retired" as president of the PTA (we call it the Home and School Assoc. in these here parts) so I could work more hours, etc. And I decided to go back to my first love (writing---not Gene from the 7th grade) and take a class in scriptwriting. Maybe it's not too late to do something really great and interesting with what's left of my life. After all, I'm only 42.
Posted by Suzanne at 9:38 PM