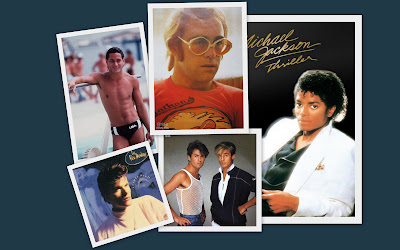 The passing of Michael Jackson has made me a bit reflective the last few days. No matter what you thought of him --- which could run the gamut from tortured odd duck to pedophile --- you have to agree that he was a creative genius. But he was also serious wall art in my teens.

One wall in my bedroom was covered with posters and clipped photos from Tiger Beat and Teen Beat magazines. (I had to Google it to see if they even publish those anymore. They publish those two, which sell quite well, but not Life. And they say we American's are unrefined!) There were so many photos and the like on that wall that when it was time to move and I had to tear them down, the chunks of wall plaster that came off with the adhesive made my room look like the scene of the Romanov execution. (Look it up people...the July 1918 edition of Tiger Beat had a great cover story.)

But I digress from the original theme of this blog entry. Look carefully at the photos above, which are copies of the actual posters from said wall. Now imagine a 15'x12' collage of the same faces. Notice anything? Anything at all? Greg Louganis? George Michael? Elton freaking John? What the hell was wrong with me? Was I completely clueless at 17? I mean, I moved here from San Francisco! So many months (OK, it was years, an admission that makes me even lamer) lusting after men who ended up being completely flammable. Only thing I was missing was a poster of Rock Hudson for Pete's sake!

But with age comes wisdom, and better gaydar. From moving day on, I only hung art on my walls. And now in my bedroom hangs only vintage posters and heirloom paintings, and a photo of my husband. Ummmm......
Posted by Suzanne at 1:50 PM

You crack me up Suze!! As for your bedroom wall...I must say "ditto"!! Only a couple of exceptions in my case...no Elton...add some Bee Gee's (Andy Gibb...so cute!), Duran Duran, (maybe some Culture Club...allegedly)..and there you go...same pix!! In fact, it was all downhill for me, as I went on to my Bon Jovi, Whitesnake, Poison phase (the more hair and make-up the better)!! I've always known I'm not quite right!! Oh and just for the record I don't have a picture of your hubby in my room! ;)